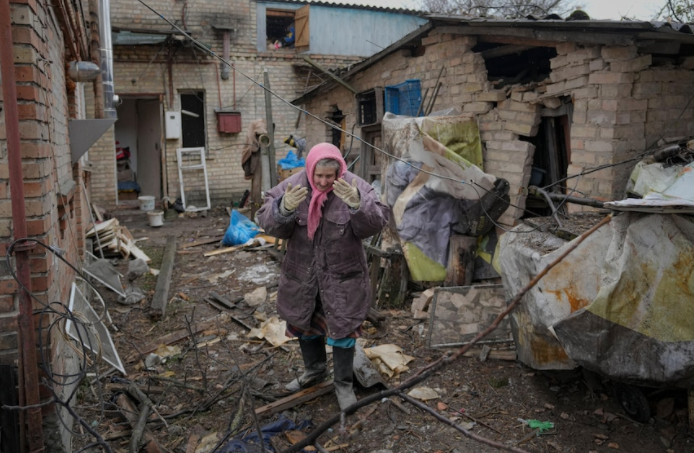 Photos show Ukrainians in the ruins of their homes, damaged during Russian Invasion

More than 2 million people have fled Ukraine since the invasion began on February 24, according to the United Nations.

But in a country of more than 40 million people, most Ukrainians remain in their homeland.

These photos capture some of those who have lost their homes amid the ongoing violence.LIVE UPDATES: Read our blog for the latest news on the Russian invasion of Ukraine

“I have witnessed many difficult things since this conflict began. I saw tens of thousands of refugees and around 90 per cent of them were women and children. Their tales are very similar, of being woken up by the sounds of bombs and grenades, grabbing some belongings like their passports, maybe a little money, or a plush animal for the children.

One of them, a little girl called Paulina, had a little fox. She hugged the toy as if it was the most precious thing in the world.

At the peak, around 140,000 people were crossing into Poland every day. The figure has dropped, but there are still so many people seeking protection in Poland.

We’re present at the borders with Ukraine, where we are monitoring the situation, helping the authorities and the NGOs working there. We talk with border guards. we are talking with volunteers with NGOs, with the government. And first and foremost, we listen to the refugees.

Very often they had to wait for days at the border, especially during the first ten days, many of them sitting in unheated cars in freezing temperatures, around minus five degrees Celsius.

Many others arrived by bus or train, and then they had to walk several kilometres to the border. I saw families arrive at the border, and then the father would hug his wife, hug his children, and then go back to Kyiv, or wherever he came from. These were heart-breaking scenes.

‘I miss my daddy’

When I spoke to the refugees, the most common question I heard from the mothers was “when can we go home”. And the children would say “I miss my daddy so much”. That was very difficult to hear.

Once the refugees have crossed the border, they go to one of the reception centres at the crossing points, where they can find some food, a bed, and usually an internet connection so that they contact their loved ones. The centres are usually in schools or sports halls, but at least it’s warm.

From there, they try to find something to stay for a couple of weeks. Most stay in Poland, but others head to other countries, such as Germany.

It’s important for other countries to share the burden, rather than leaving Poland and other countries near Ukraine, such as Romania, Moldova and Slovakia, to cope: this is a European and international crisis. The good news is that we are seeing other European Union countries willing to help. 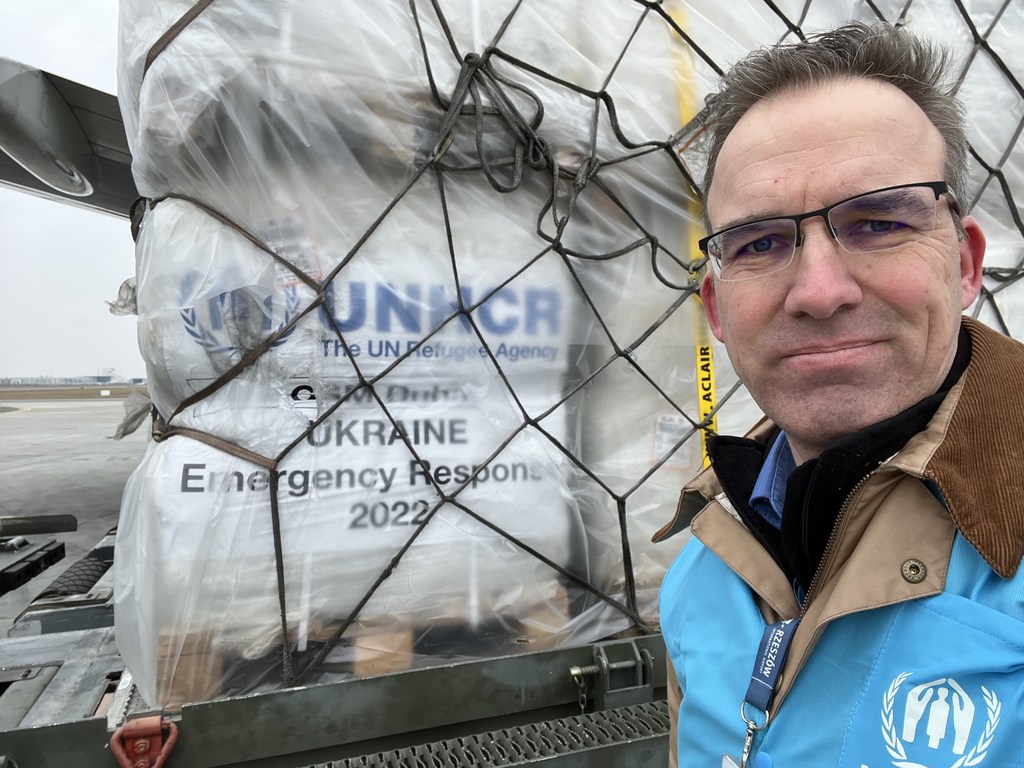 How to help Ukrainian refugees

I am impressed by the solidarity of volunteers and local organizations that are providing food, transport and accommodation.

However, I would ask that individuals contact an NGO, or even better the authorities in their country if they want to do something, because their help will be much more coordinated and efficient.

For example, we work with the Red Cross in Poland and Ukraine, as well as other NGOs who are doing a great job. We couldn’t do our work without them.

The fastest and most efficient way to help is by donating money. People can also open their doors to refugees. Doing so would be one of the most important experiences in your lives.

More than two million Ukrainian refugees in about two weeks. is unprecedented. It’s a huge challenge but the solidarity seen in so many countries has been enormous, so I’m confident that we will cope.

Reminder of dark times in Europe

When I saw these people I was reminded of my mother. She was nine years old in 1945, when she had to flee the Second World War. She is now 86, and she’s been sitting in front of the TV for sixteen, eighteen hours per day for the last two weeks, absolutely shocked, seeing her childhood suddenly in full HD and colour again here.

She’s been crying the whole day, and she asks me, when will it stop, how can it stop. And I have no idea. I have no answer to that.”

© UNHCR/Chris MelzerDonations of clothing, shoes, toys and other basic items provided by Polish citizens for refugees arriving from Ukraine at the Medyka border crossing. 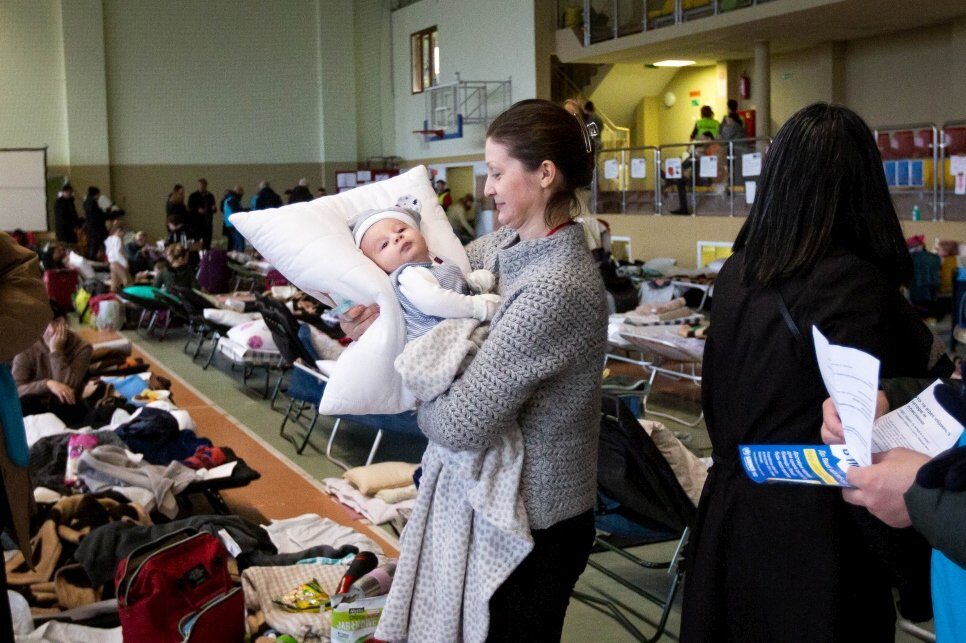 After an arduous journey to safety, two-month-old Andrii is among the youngest of more than 2 million refugees from Ukraine, but his aunt already looks forward to the day he can return.

In a large sports hall in the Polish border town of Medyka, hundreds of camp beds cover the playing courts to provide temporary accommodation for refugees from neighbouring Ukraine. Amid the bustle and noise of families with young children, Valentina cradles her two-month-old nephew Andrii in her lap and tries to make sense of the past few days.

“I never thought I would have to leave my home. That I would have to flee just to save my life,” Valentina says. The 42-year-old kindergarten teacher arrived in Poland on 5 March along with her eight-year-old daughter, sister, and baby nephew. They reached safety following an arduous week-long journey covering hundreds of kilometres by bus, train and on foot from the northeastern Ukrainian city of Kharkiv.

After walking the last stretch across the border with Andrii wrapped in blankets against the biting cold, everything went smoothly. “Everyone here was so friendly,” Valentina says. “They took us in and first gave us something warm to eat.”

“I never thought I would have to leave my home.”

A bus brought them to the sports hall, where there is little in the way of privacy but a multitude of volunteers from the local fire brigade, Red Cross and other organizations on hand to distribute food and donations, and play games to keep the children occupied.

“Now we have made it, but I can’t be happy, even though I hold our future in my hands, and he smiles at me all day,” Valentina says, looking down at Andrii blinking in the bright fluorescent lights of the hall.

Since the escalation of the conflict in Ukraine beginning on 24 February, more than 2.2 million people have fled the country in what has become Europe’s fastest-growing refugee crisis since World War II. So far, more than 1.4 million refugees – mostly women, children and older people – have crossed the border into neighbouring Poland.

UNHCR, the UN Refugee Agency, has teams at the borders in Poland and other neighbouring countries to support national authorities in providing assistance and protection to people fleeing. As well as distributing relief items, the agency is providing information and counselling services, and helping to identify people with specific needs including children who have crossed the border alone and people with disabilities.

UNHCR Poland’s Katarzyna Oyrzanowska says the agency has been present at the border from the first day of the crisis, and a particular focus for her and her colleagues has been to monitor how children are being accommodated and cared for.

“By far the largest part of the refugees are women and children. You hardly ever see a man,” Oyrzanowska says. “We try to find solutions for them. They have been torn from their familiar surroundings, miss their fathers and do not understand the situation. All this is difficult for adults to cope with. What must it be like for children?”

“We were suddenly… refugees.”

Andrii’s mother Irinia describes the moment during the first days of the conflict when Kharkiv shook with the sound of explosions, and they decided to escape.

“We gathered some things and fled. We were suddenly… refugees,” Irinia says, still coming to terms with the reality of their situation. “Our men stayed behind to defend our country. We took our children to safety.”

Her sister Valentina hugs her nephew tightly and responds: “He is a refugee now, but he won’t stay one. We’ll look after him now. And when he is big and strong, he will rebuild our country.” She kisses his forehead and says “maybutnye”. “Future”.